Mole poblano is the best known of all mole varieties and has been ranked as number one of “typical” Mexican dishes. It has also been called the “national dish” of Mexico. The state of Puebla is identified with mole poblano. Mole poblano has been described as an ancient dish.

Mole poblano contains about 20 ingredients, including chili peppers and chocolate, which works to counteract the heat of the chili peppers, but the chocolate does not dominate. It helps give the sauce its dark color, but this is also provided by the mulato peppers. This sauce is most often served over turkey at weddings, birthdays and baptisms, or at Christmas with romeritos over shrimp cakes. The sauce is also served with chicken, pork, or other meats. Another time when the sauce is prominent is Cinco de Mayo. While this holiday is not celebrated much in the rest of Mexico, it is a major celebration in Puebla.

Various types of mole sauces can be found throughout the center of Mexico toward the south. There is the mole amarillito of the southeast, the mole coloradito of the Valley of Mexico (as opposed to the mole of the same name in Oaxaca), the mole prieto of Tlaxcala, mole ranchero from Morelos, and more.  Taxco has a pink version of mole, called mole rosa. The spiciness of this version is very mild. The word guacamole (avocado sauce) is derived from “guaca” (from “aguacate” or avocado) and the word mole.

The city of Puebla also holds an annual mole festival, whose proceeds are shared among the Santa Rosa, Santa Inés and Santa Catarina convents.[20] The world’s record for the largest pot of mole was broken at the city’s 2005 festival. The pot was 1.4 meters in diameter at the base, 1.9 meters high, with a diameter of 2.5 meters at the top. Four hundred people participated in its preparation, using 800 kilos of mole paste, 2,500 kilos of chicken, 500 kilos of tortillas and 1,600 kilos of broth. The resulting food fed 11,000 people.[18] 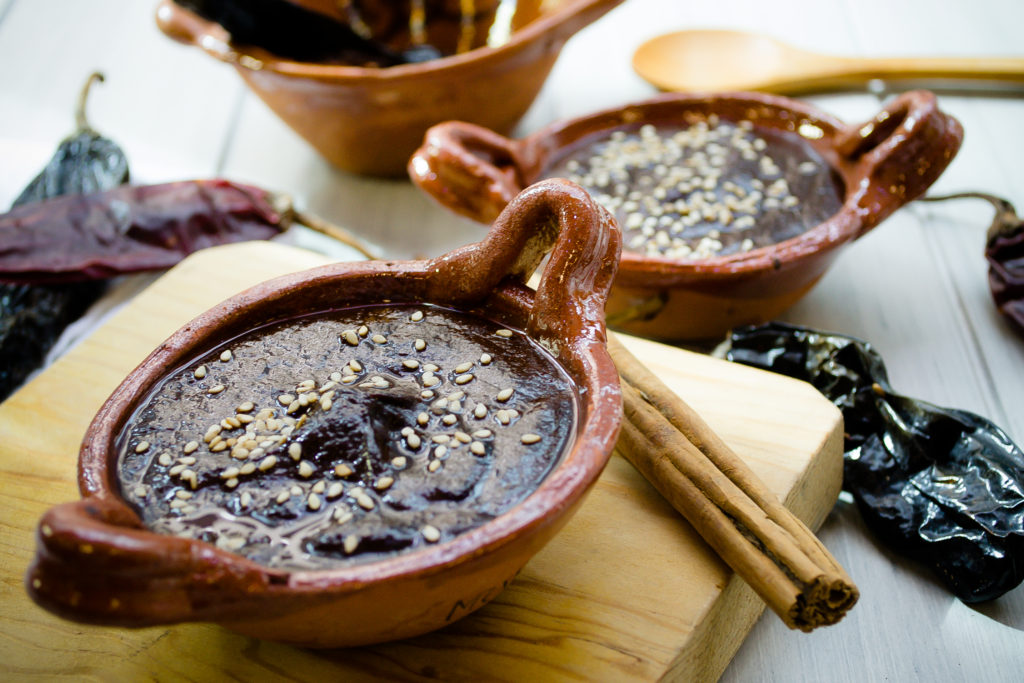 Mole has become a popular and widely available prepared food product in the United States.[29] Several brands of mole paste are available in the United States and can be found online.[11] Chicago has an annual mole festival for Mexican immigrants at the Universidad Popular community center. The event is a cooking contest, which had over 40 entries, with the winner taking away US$500.[30]