Chocolate (from Náhuatl: xocolātl ) (/ˈtʃɒklɪt, –kəlɪt, –lət, ˈtʃɔːk-/) is a typically sweet, usually brown food preparation of Theobroma cacao seeds, roasted and ground. It is made in the form of a liquid, paste, or in a block, or used as a flavoring ingredient in other foods. The earliest evidence of use traces to the Olmecs (Mexico), with evidence of chocolate beverages dating to 1900 BC. The majority of Mesoamerican people made chocolate beverages, including the Maya and Aztecs. The seeds of the cacao tree have an intensely bitter taste and must be fermented to develop the flavor. After fermentation, the beans are dried, cleaned, and roasted. The shell is removed to produce cacao nibs, which are then ground to cocoa mass, unadulterated chocolate in rough form. Once the cocoa mass is liquefied by heating, it is called chocolate liquor. The liquor also may be cooled and processed into its two components: cocoa solids and cocoa butter. Baking chocolate, also called bitter chocolate, contains cocoa solids and cocoa butter in varying proportions, without any added sugars. Much of the chocolate consumed today is in the form of sweet chocolate, a combination of cocoa solids, cocoa butter or added vegetable oils, and sugar. Milk chocolate is sweet chocolate that additionally contains milk powder or condensed milk. White chocolate contains cocoa butter, sugar, and milk, but no cocoa solids. Cacao, pronounced by the Olmecs as kakawa, dates to 1000 BC or earlier. The word “chocolate” entered the English language from Spanish in about 1600. The word entered Spanish from the word chocolātl in Nahuatl, the language of the Aztecs. The origin of the Nahuatl word is uncertain, as it does not appear in any early Nahuatl source, where the word for the chocolate drink is cacahuatl, “cacao water”. It is possible that the Spaniards coined the word (perhaps in order to avoid caca, a vulgar Spanish word for “feces”) by combining the Yucatec Mayan word chocol, “hot”, with the Nahuatl word atl, “water”. Another proposed etymology derives it from the word chicolatl, meaning “beaten drink”, which may derive from the word for the frothing stick, chicoli. The term “chocolatier“, for a chocolate confection maker, is attested from 1888. 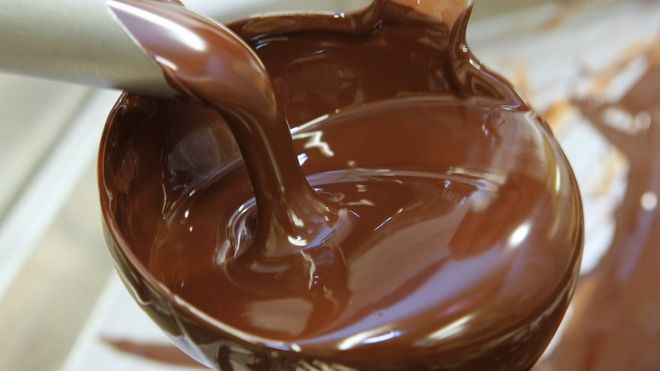 Chocolate is made from cocoa beans, the dried and fermented seeds of the cacao tree (Theobroma cacao), a small, 4–8 m tall (15–26 ft tall) evergreen tree native to the deep tropical region of the Americas. Recent genetic studies suggest the most common genotype of the plant originated in the Amazon basin and was gradually transported by humans throughout South and Central America. Early forms of another genotype have also been found in what is now Venezuela. The scientific name, Theobroma, means “food of the gods“. The fruit, called a cacao pod, is ovoid, 15–30 cm (6–12 in) long and 8–10 cm (3–4 in) wide, ripening yellow to orange, and weighing about 500 g (1.1 lb) when ripe.

Cacao trees are small, understory trees that need rich, well-drained soils. They naturally grow within 20° of either side of the equator because they need about 2000 mm of rainfall a year and temperatures in the range of 21 to 32 °C (70 to 90 °F). Cacao trees cannot tolerate a temperature lower than 15 °C (59 °F).

The three main varieties of cacao beans used in chocolate are criollo, forastero, and trinitarian.

Cacao pods are harvested by cutting them from the tree using a machete, or by knocking them off the tree using a stick. The beans with their surrounding pulp are removed from the pods and placed in piles or bins, allowing access to micro-organisms so fermentation of the pectin-containing material can begin. Yeasts produce ethanol, lactic acid bacteria produce lactic acid, and acetic acid bacteria produce acetic acid. The fermentation process, which takes up to seven days, also produces several flavor precursors, eventually resulting in the familiar chocolate taste.

It is important to harvest the pods when they are fully ripe, because if the pod is unripe, the beans will have a low cocoa butter content, or sugars in the white pulp will be insufficient for fermentation, resulting in a weak flavor. After fermentation, the beans must be quickly dried to prevent mold growth. Climate and weather permitting, this is done by spreading the beans out in the sun from five to seven days.

The dried beans are then transported to a chocolate manufacturing facility. The beans are cleaned (removing twigs, stones, and other debris), roasted, and graded. Next, the shell of each bean is removed to extract the nib. Finally, the nibs are ground and liquefied, resulting in pure chocolate in fluid form: chocolate liquor. The liquor can be further processed into two components: cocoa solids and cocoa butter.